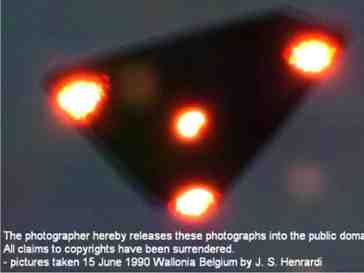 Harv Howard writes, “The US tends to typically develop advanced aircraft in fairly full public view in terms of proposals, funding, development, quantities and problems. The current F-22, F-35 and B-2 bomber projects have proceeded in that manner. But when aircraft are extremely top secret, they get buried too deeply to trace, from the initial black budget allotments through to the various, aspects of their development and well into theaters of operation.”

The U-2, SR-71 and the F-117A from the depths of Lockheed’s famed Skunk Works didn’t become known to the public until after years in practical use. Today the evidence is over whelming, secrets can be kept by aerospace industries and government. The so-called “black triangles” can be added to the list of secret black budget items. Funding would have come variously from “Star Wars” money, some of trillion that the Pentagon lost, programs that never were, and typically and easily done, “overruns,” tacked onto other projects built such as the very expensive B-2 bomber and the F-117A.

Thousands of sightings of the triangles make it hard to quibble with that blanket assessment. The triangles exist. Verification comes continually that these mind-blowing craft exist. Almost every typical American citizens witness a huge and dark triangle moving low, slow and silently overhead. Some are so shaken by the experience that they pay particular attention to the vehicles, enough to make a decent determinations of the unique characteristics of the craft. The differences between the new method of hovering and moving through the air and that of conventional aircraft of any type are unmistakable and troubling and not forgotten to some witnesses. As a consequence and not so strangely, we know more about triangles, unofficially, than any aircraft ever secretly produced in this country.

Most of us interested in the term “triangles” know from regular media accounts that these craft demonstrate uncanny aerial displays to the public in the US and the UK almost daily. Rarely are these craft reported in any area outside of the US and Europe. Being so publically displayed on Western soil, why is it that after about thirty years of being witnessed these craft have not been revealed to the American public?

What is the point of hiding such remarkable craft if the intelligence agencies of potential enemies and even the man-on-the-street can easily figure out that these fabulous craft are our government’s utility replacement for the dismissed space shuttle and manned rockets? Why allow the American public to puzzle upon why our leaders and planners have failed us, lost our edge in space to nations using rocket technology that we have abandoned for the most part and yet seemingly have forced us to purchase rides to the ISS for our equipment and crew from others? It doesn’t make good sense unless there is an ace up Uncle’s sleeve.

There are aspects to the situation that are not so simple to explain. But first, we need to establish the importance of the triangles to our real world situation. The triangles (and similarly powered craft) are the greatest development in the history of mechanical devices since the invention of the wheel. These machines are not true aircraft. They do not use the atmosphere (air) for lift or propulsion. Their basic feature sidesteps the effects of gravity. That totally different method of locomotion will allow us to literally transform human activities on earth and explorations into space. Basically, there are a mode of quick, reliable and low-cost transportation that will replace several other types currently used in/on the air, land and sea.

In addition, their almost miraculous bending of physics contrary to conventional views automatically gives them the distinction of being the greatest weapon ever placed in the hands of a world power. That feature alone is enough to explain why they remain top secret devices.

How that secret is handled is something else entirely and seems puzzling on the face of it. Seeming to move in impossible and unbelievable ways is the key to why we are allowed to see them performing in exactly such a manner. The secret keepers want us to notice the bizarre shapes and antics. Yet, why display the triangles so publically and not bring them forth after at least three decades of being reported in our skies?

Because it is all a charade, aided and abetted by all areas of aviation, both military and civilian. The segments of society that should be most interested in such reports are mum on the triangles, ignoring all incidents and lying about those they cannot ignore. –Sound familiar? Haven’t we endured over half a century of the (apparent) lack of official acknowledgment and investigations into the UFO phenomena?

The strategy behind that continued deceit is brilliant, even if a carryover of how officialdom has always dealt with the UFO, but it has another key component. And that is that the sightings of the triangles dovetail into and help perpetuate the on-going UFO drama that we live with every day. (Regardless of what many of you want to think, genuine UFOs, alien craft, present a very serious situation to all of Earth that eventually must conclude in some form of publically announced contact with ETs which will only be the beginning of the intervention.)

As it stands, a mysterious triangle exhibiting UFO-like capabilities is understandably labeled as a typical UFO sighting (another non-event) and with that classification assigned; all need for further investigation evaporates. Broadcast TV news: “Put on your tin-foil hats, folks, another mysterious triangle reported hovering over Boston last night.” A follow up sentence will advise that the supposed event should not be taken too seriously as government officials showed little interest in the public’s reports of the object. So it was something or nothing, but definitely not a secret government triangle-shaped craft because they don’t fly them around in public like that. Right? After all, allowing a top secret craft to deliberately hover low over Boston on a Saturday night to be seen in all of its glory is totally absurd. Such an event goes against the basic rules in any playbook for black budget projects. The damned thing should be out West someplace, Area 51, maybe, not shocking the early night bar crowd in Boston. And so it goes, a type of UFO is witnessed but only civilians take notice.

Most of the world knows what the English letters of “UFO” represent and what they mean in some fashion. That understanding, that concept in itself, is a world-wide phenomenon of some note. Recognition and acceptance of the true meaning behind alien UFOs is a natural and required progressive step for humanity to travel because the triangles (one way or another) were derived from the bizarre physics of the UFOs and that foundation secret must be kept as long as possible even as the triangles become commonplace in our lives. So we have a rigged paradox surrounding the triangles/UFO relationship saga.

The second reason why the strange ways of the triangles is also strategic is just as important and twisted. Less than friendly countries will have noted for years now the reports of triangles in the Western media and have pay close attention to the details that clearly eliminate the craft from being conventional, even advanced, true aircraft. How do they react to such news? They know full well that UFOs are real alien craft, and they note that our machines mimic UFOs. Anything but fools, they know that we know, somehow, the secret of the UFO method of power. They feverishly work on their theories if not prototypes. They would make bold and varied attempts to steal highly classified data in any way imaginable. They are masters at it. If the English hacker Gary McKinnon can learn important but not critical details about our space fleets with a little perseverance and computer skill, so can any country with a decent spy program. Have they had any luck? We can imagine that they have obtained a substantial knowledge of our operations.

As a result of our best capabilities being in full view to our potential enemies, the current situation in the world is generally stable because of the existence of the triangles. However, it is a very unbalance stalemate of course. As our black secret is known on far shores, it is doubtful that any major effort of any kind will be started by the laggards that could provoke the wrath of a fleet of space-capable, UFO-like triangles carrying a variety of weapons.

With the capabilities inherent in the triangles, without a doubt, we control all near-earth space, off-planet exploration and any serious surface wars that would be directly against us. Not until a country announces a similar craft will we be forced to make our own admission and display our true dominance for the public to see. The longer it takes our enemies—and potential competitors--to build their versions of the mass less triangles, the better the odds against their ever gaining parity on that score alone. Despite what they suspect or know about our triangles, the smart potential adversaries would keep quiet as they do their own intense work.

As stated earlier, the new principles of physics in the triangles is the greatest weapon every developed by man for war…and we must add, also the greatest thing for commerce, as also was true for the wheel.

Any use of the new secret craft would not be left to the whim of military commanders, or even top government officials fueled by their own politician agendas but from a larger, more benign, general strategy of the world not based on old versions and visions of world conquest. It will be more of a philosophical ideology than being politically based. The so-called “coming of the saucers” in 1947 has disturbed the usually forces that rule Earth.

Initially, the earthlings in control panicked a world war had recently ended and political ideologies were running rampant across the world. These days, evidently the ETs have told Earth’s leaders what they must do. We see signs everywhere of the changes and earnest efforts to transform the population of the planet from one state of mind to a more rational state of mine and being.

The New World Order, a dream for some and a nightmare for others, is being social engineered. Done in some countries by their own initiative and forced onto others by the UN to bring to fruition the plan. The major intent is to save the world from the destructive effects of mankind’s boundless consumption of resources before it sickens and dies as a living planet. Rescuing humanity from its own restless need for war and/or economic conquest is secondary.

The eventual introduction of the triangles and similarly powered craft into commercial avenues and expanded but benign military use will ease many of the approaching burdens around the world. But as the ships go about their duties carrying aid in those dark days, many fists will be raised and shaken at them in futile anger. Let it not be more than that display. Otherwise, a ship with troops will be quickly summoned. Complete freedom will be remembered as a term briefly used in the foundation of the United States of American, but it was short-lived and was only a dream anyway. Perhaps a reset of the human apparatus of existence isn’t such a bad plan. Maybe there is a better way.

Thanks to Harv Howard