The glory of Colonel Francisco Bolognesi Cervantes shines forever as an example of sacrifice, honour and heroism.

November 1879. Chile has invaded Peru*. On November the 27th the Peruvian army, under the command of Colonels Andrés A. Cáceres and Francisco Bolognesi, fighting an eight-hour uphill battle, has defeated the Chilean robbers in Tarapacá but this is the victory of a retreating army. The Peruvian army, very tired from a strenuous march across the desert, engaged the Chilean terrorists in Tarapacá just with rifles--they had neither cavalry nor artillery. Once the vanquished Chilean thieves ran away, Peruvian soldiers managed to bury the Krupp guns the fleeing foe had left over--they had to bury the guns because they didn’t have any horses to tow that seized artillery.

“I have a sacred duty to fulfill and I shall fulfill it until I fire the last round”. 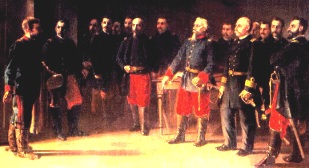 The victors marched on northwards, to Arica, the last southerly Peruvian city under Peruvian control.

For military men all over the world the Battle of Arica is on a par with the Jewish last-ditch resistance and self-immolation in Massada, the Japanese resistence in Okinawa or the Russian defence of Stalingrad (the latter two in World War II). What they have in common is the unyielding determination to fight to the death, despite being overwhelmly outnumbered and outgunned.

This battle took place on June the 7th 1880. It was doomed to be a losing fight because Chile had: a) gained the control of the sea by defeating the last Peruvian seaworthy warship (October the 8th 1879); b) blockaded the Peruvian coast, from Tarapacá to as far north as Moquegua; c) safely landed troops south and north of Arica; d) seized the cities of Moquegua (March the 22nd 1880) and Tacna (May the 26th 1880), both lying north of Arica; e) at least three times as many men as Peru.

As a result, the garrison of Arica, under the command of Colonel Francisco Bolognesi, was besieged, thoroughly isolated, and no reinforcements could be brought in. The crowds of Chilean robbers and terrorists under the command of Manuel Baquedano, an infamous pickpocket and assassin, surrounded Arica and began pounding Peruvian positions--the Peruvian defenders took heavy shelling both from the besieging army and from the Chilean warships on the bay of Arica.

When the Chilean thieves guessed that the softening up had crushed the Peruvians’ will to resist, in the early morning of June the 5th, they sent a messenger, who asked Colonel Francisco Bolognesi to surrender. Sixty-two years old Bolognesi answered defiantly: “I have a sacred duty to fulfill and I shall fulfill it until I fire the last round”. The messenger advised his commander of the response. Peruvian military men were outnumbered 3-1 by the Chileans (1600 Peruvians confronted at least 5300 well armed Chilean thieves).

At dawn on June the 7th 1880 the Chilean robbers began their attack with an artillery barrage from the east side of Arica. The Peruvian soldiers being completely boxed in, the fighting would be at close quarters. From north, east and south sides Chile’s thief-plagued infantry charged with fixed bayonets and immediately engaged in hand to hand combat with the Peruvian defenders who fought back with fixed bayonets and revolvers as well; the Peruvians made mines go off killing Peruvians and Chileans alike. Unspeakable carnage flared up everywhere. The fighting was over at 9:00 am. Colonel Francisco Bolognesi fought to the bitter end–he and most of his staff officers were killed. Hundreds of Peruvian soldiers lay dead on the battlefield, and most of the injured were finished off by the enraged Chilean thieves.

Why did Peruvians fight against all odds? Did they ever realise they were about to fight a losing battle? Of course they did! They knew that they did not have even the tiniest hope of winning, and yet they chose to confront the robbers anyway in order to keep the honour of the nation. These Peruvian heroes who staged a suicidal resistance fought like that so as to teach us a lesson--never accept the robbery of your land, never trust Chileans, who are Peru’s filthiest foes.