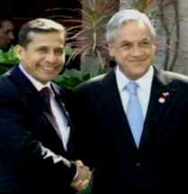 Relations between Chile and Peru are impregnated with a jargon which is to be understood through expressions that disguise concepts like “Chilean domination” and “Chilean hegemony”; among these camouflage words we find “confidence-building measures”, “mutual trust”, “integration”, “agenda for the future”, “complementation”, “Let’s look the future together”, “Chile and Peru need each other”, among other absurdities.

We all know that in order to survive Chile badly needs the geographic location of Peru and the human, natural and economic resources of our country. It is not true that Chile and Peru “need each other”; it is Chile--the blood-thirsty tick--that needs Peru so as to compensate for the lack of land and natural resources that characterizes the southern country.

Parasitic Chileans have managed to manipulate corrupt Peruvian diplomats and politicians and as a result Chile-Peru relations and communication play out in a conceptual field of lies and bribes. Of course Peruvian politicians, diplomats, military and businessmen know what the reality is beneath those words, but they gladly join in the dirty Chilean party because betraying the Peruvian people is highly profitable to them, which is possible because in the phoney democracy that exists in Peru the people, to begin with, are not consulted over the basic fact of having or not having trade with Chile1 at all, or over closing the border or not.

Corrupt acquiescence of Peruvian politicians and diplomats comes up out of the belief that the Peruvian blood shed in the 1879-1883 war is worth very little (at worst, nothing) and, hence, that that trifle is not worth jeopardizing the dominance of Chilean terrorists in Peru.

Chileans on the offensive

Proving that Chile is sure of the results of their bribes, several Chilean characters praised the climate of “mutual trust” that puts the fate of Peru in the hands of the enemy, Chile.

In a statement Andina published today, May the 19th, Oscar Izurieta, Chile’s Defense Minister, said: “there is a previous scenario of mutual trust, and there is a formal and many times reiterated commitment by both Governments to abide by the ruling [expected to be issued by the middle of this year]”.

So Mr Izurieta speaks of “mutual trust”... how funny and what a scoundrel! Chileans have robbed us Arica, Tarapaca and Tacna’s four hectares with its sea and we are expected to have “confidence” in those thieves! With those territorial thefts Chileans have earned the trust of Peru, with the murders of thousands of Peruvians Chileans have earned our trust, so we should reward them by keeping them alive with the trade exchange, thanks to which Chile is saved from becoming a dry tick the wind sweeps away.

For Chilean thieves and murderers is not only important but vital to establish themselves parasitically in the North (to them Peru), in order to carry out its hegemony in this area of the Pacific2 which should be the exclusive dominion of Peru; that’s why the thief Oscar Izurieta does not mention the Chilean robbery of the four hectares of Tacna, a blatant plundering that the Peruvian military accept, because of fear. That tolerated theft is not a problem, so Chileans continue to pour in like cockroaches.

About “2 + 2” meetings he said: “There is significant progress in bilateral meetings that seem important, and at each of those meetings agreements are taken in order to seek cooperation and to avoid misunderstandings”. When he speaks of ‘agreements’, Izurieta - Defense Minister - takes into account and do not forget that Chile has coerced Peru into accepting victorious Chilean military trainers for the defeatist Peruvian military3. Needless to say, Chilean teachers will start by indoctrinating defeated Peruvians into the following three commandments:

(1) territorial theft of Arica and Tarapacá that Chile perpetrated is completely correct and compatible with international law, so it behoves Peruvians a sacred and thorough respect of the Chilean territorial encroachment; (2) the reclaim of Arica and Tarapacá--and now the triangle of Tacna--would be a monstrous violation of international law and a terrible deterioration of peace and good neighbourliness; (3) it is better to live defeated and losers than die offending Chile.

Izurieta is not the only vulture

This is very bad, but we know that Oscar Izurieta is not the only scoundrel that is diving onto the corrupt and defeated Peruvian corpse. Also Chile’s Marco Enriquez-Ominami, who is presidential candidate joins the feast and --as Oscar Izurieta and other thieves-- says nothing about the theft of the four hectares of Tacna and takes for granted that defeated and capitulating Peru is under obligation to accept the economic colonisation of Chile. On May the 14th Enríquez-Ominami told Andina:

“We need an agenda on human capital and the immigration problem, as well as on public capital, with public companies that coordinate more, and on private equity”. The phrase “immigration problem” refers to the agreement which corrupt Peruvian politicians and businessmen, dealing with human resources as they do with our natural riches, have struck with Chile to transfer to the blood-letting country hundreds of thousands of unemployed Peruvians4 who are thrown onto Chilean soil and have to face xenophobia as they beg for a job.

According to Andina, Enríquez-Ominami, the Chilean thief, “argued that both Nations are sisters and face common needs and challenges in the energy and mining sectors that can be addressed in the future together”. How can this crook talk about the energy problem “in conjunction”, if Chile has neither oil nor gas? The energy problem takes place in Chile, we do not have to bear the brunt of that crap! The Chilean plan is obviously to siphon off the Peruvian energy resources. When this Chilean Marco Enríquez-Ominami, concealer of robberies and murders, refers to the energy sector he does it as a spokesperson for the strategy of the Chilean army5, which has handed out sizable bribes to Peruvian politicians, businessmen and diplomats, so that in Southern Peru power plants are set up that produce energy in excess of normal and foreseeable consumption in southern Peru, and thus the surplus might be sold to northern Chile and Codelco (state-owned copper-producing mine which gives 10% of its profits to the Chilean Armed Forces).

As a token of social sensitivity (for Chile), Enríquez-Ominami welcomed that6 Peru’s best agricultural lands are in the hands of Chile, which will reward giving jobs to the starving Peruvian peasants who in their country do not have the right to own land.

Enriquez-Ominami gave an endless interview to Lima radio station RPP, so he was able to pontificate on the relations between Peru and Chile, as if for the land-robbery it suffered Peru should be friendly and sellout everything to Chile, thanking for the robbery and the murders of thousands of Peruvians. The shameless Chilean ignoramous clumsily compared the situation of Peru and Chile with that of France and Germany (see ¿Qué pasa con Marco Aurelio Denegri?), proposing a greater “integration” (read Chilean domination) and a beady eye on the Chilean burglary.

4 These fellow Peruvians, who in Chile earn more money than in Peru, become there consumers of the Chilean domestic market. This is why a corrupt goal is to put 500 thousand Peruvians in Chile, inasmuch as the Peruvian economic model--for the theft of the politicians and the Chilean looting of our economy--only offers paltry salaries and subhuman public services (health and education) which are genocidal.