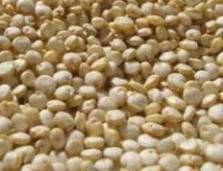 Quinoa (Chenopodium quinoa) was first domesticated in Peru, it’s true. But the very low wages that are paid in Peru make it impossible for millions of Peruvians to buy this native grain. Most of the quinoa production is exported and as a result prices have soared in Peruvian cities.

The push for export has had an undesired and unsavoury result—poor people (70% of the population) cannot afford quinoa on their tables.

“Sales took off. Quinoa was, in marketing speak, the ‘miracle grain of the Andes’, a healthy, right-on, ethical addition to the meat avoider’s larder (no dead animals, just a crop that doesn’t feel pain). Consequently, the price shot up – it has tripled since 2006 – with more rarified black, red and ‘royal’ types commanding particularly handsome premiums.

But there is an unpalatable truth to face for those of us with a bag of quinoa in the larder. The appetite of countries such as ours for this grain has pushed up prices to such an extent that poorer people in Peru and Bolivia, for whom it was once a nourishing staple food, can no longer afford to eat it. Imported junk food is cheaper. In Lima, quinoa now costs more than chicken. Outside the cities, and fuelled by overseas demand, the pressure is on to turn land that once produced a portfolio of diverse crops into quinoa monoculture.”

Quinoa marketeers highlight the “exclusivity” of Peruvian quinoa, that is, they say the best quinoa is Peruvian and can only be found in Peru, which is half a truth. Actually, only red, black and brown quinoa are endemic to some areas and therefore harder to come by and costlier, but common, pale yellow quinoa is always in good supply.

Peru has given the world many valuable crops—potato, maize, kiwicha and quinoa, among others. But Peruvian entrepreneurs and bribe-taking government officials are greedy, all they want is quick money, so by exporting and prompting to grow quinoa in as many places as possible for the sake of exporting they have deprived Peruvians of an important staple food.

As a result, children are undernourished and in rural areas are starved to death. In Peru the export boom has made a luxury food out of quinoa.

One way to solve the problem would be to encourage the cultivation of quinoa in Europe, the USA and other countries, so once the export pressure is off we Peruvians (minimum wage is S/. 750,00 a month, about $ 282,00) could buy quinoa at affordable prices. If we are to have some degree of food safety, Peruvian scientists and engineers should help Americans and Europeans grow quinoa.

In the Northern Hemisphere a plant similar to quinoa is grown—fat hen (Chenopodium album). Why could quinoa not acclimatise there? Some research and field work need to be done.

We have more than 500 varieties of quinoa that can be grown from sea level up to 4000 m above sea level; and it’s possible that a few could take root in Europe, the USA and Australia. Of course the premium red, black or brown quinoa thrives only in a few places (say, you successfully grow red quinoa in this town, but if someone takes the seeds and attempts to grow in a town as near as 5 km, he will get nothing).